HISTORY OF OUR LODGE

Orange Blossom Lodge No. 80 was chartered on January 22, 1885. In order for the present and future members of our Lodge to more fully appreciate its history, it is in order to mention some facts that led to its founding.

Florida became a state in 1845, as the 27th state of the Union. Osceola County was formed in 1887 from parts of Orange and Brevard Counties. Kissimmee City received its full legal status on March 24, 1883, while still a part of Orange County, with a total of 33 out of 36 eligible voters participating in the election.

In 1881, Hamilton Disston had purchased four million acres of land from the State of Florida at twenty-five cents per acre, and in a second agreement he was to get additional acreage for draining portions of the lands involved in the first deal. As Kissimmee was near the northernmost parts of these lands, he made our town his headquarters. This caused an influx of new citizens to our area, and many more moved in when the railroad, a part of the South Florida Railroad System, reached Kissimmee from Sanford in 1882. It was completed into Tampa in 1884 by the Henry B. Plant System.

Among the many new residents which these two events brought to Kissimmee, were several Master Masons from other areas, who, missing the fellowship of their home lodges, decided to establish a local lodge. After several meetings, a committee was selected to contact Orlando Lodge No. 69, who agreed to act as sponsors.

As we think back on these pioneer days we must keep in mind that lodge meetings would have to be reached mostly on foot, while some came on horseback or mule back. A few may have owned a buggy or a wagon. We can imagine that most of the meetings were held on moonlit nights and the lodge hall was lighted with kerosene lamps. We wonder how many of us have inherited enough of the pioneer spirit to attend lodge meetings under similar circumstances.

Officers of Orange Blossom Lodge No. 80 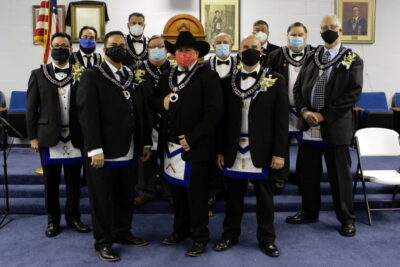 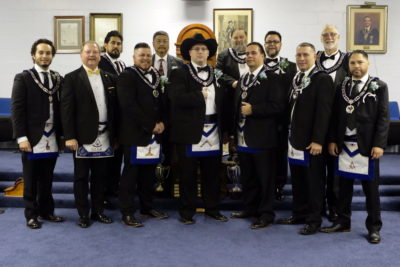