Orange Blossom Lodge No. 80, F. & A. M., was chartered by the Most Worshipful Grand Lodge of Free and Accepted Masons of the State of Florida on January 22, 1885. This original charter which today adorns the wall directly behind the Worshipful Master’s chair in the East shows the first officers of this Lodge were Joseph L. Nicholson, Worshipful Master, John M. Lee, Senior Warden, and Thomas A. Bass, Junior Warden. The year 1885 proved to be a busy year for the new Lodge for the annual report to the Grand Lodge in December 1885 showed a total of 20 Master Masons, in good standing, about half of which had been given the degrees and the others had transferred their membership from their home lodges in various parts of the country.

The Lodge held its early meetings in a two story frame building situated on the east side of Orlando Avenue between Emmett and Bryan Streets. After two or three years of successful work at this location the Lodge moved to the third floor of the Brandow Opera House which stood on the East side of Broadway about the middle of the 300 block or just north of where the Makinson Hardware is now located, where electric lights were available from a privately owned plant. After three years at this location the Lodge voted to move again to a two story frame building at the Southeast comer of Emmett Street and Orlando Avenue where meetings were held for several years. During a portion of the time the Lodge was meeting here the members had to reach the Lodge room by means of a ladder. 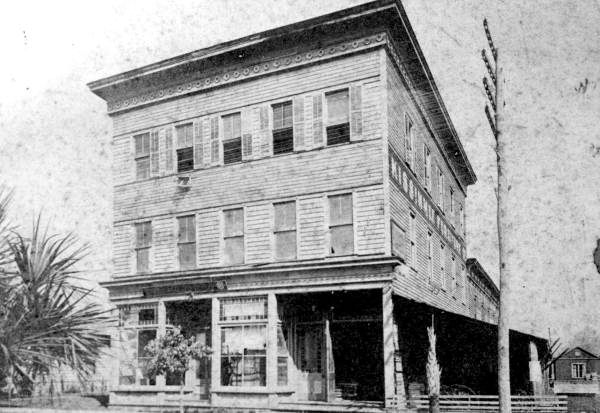 This building was sold by the owner to be moved, so the Lodge then moved into what was then known as the Makinson Building located at the corner of Broadway and Dakin Avenue. Finally in 1908 the Masons and Knights of Pythias, both active organizations, decided that they would build their own home, resulting in the erection of a handsome three story brick building about where the Kissimmee Police Department is now serving our community. The corner stone for this fine structure was laid on October 15, 1908 with the Grand Master of Florida Masons present to do the honors. A second corner stone was laid with the Masons in charge that same day, for the three story Osceola High School brick building which stood for years on the present site of the Kissimmee Municipal Building.

In addition to the Masonic Lodge and the Knights of Pythias, the third floor of “Fraternity Hall”, as it was known, was used for meetings of Royal Arch Masons, Order of Eastern Star, Pythian Sisters, Independent Order of Odd Fellows, Rebekahs and Woodsmen. The second floor provided a banquet hall and several office while the ground floor was designed and used as a theater.

Both Lodges, Orange Blossom Lodge No. 80 and Knights of Pythias Lodge No. 10, appointed three trustees each to represent them in all matters relating to the building which was completed and occupied in1909.

Rental income from the theater and the various fraternal organizations took care of all expenses and payments on the mortgage for several years but later when the theater was closed the trustees ran short of income and borrowed money from the Bond Trustees of the City of Kissimmee to remodel the ground floor, put on a new roof and pay off their indebtedness. This mortgage was dated May 3, 1926 after being approved by both of the sponsoring Lodges. During the depression years of the 20’s and 30’s? various business concerns used the first floor but the Trustees got so far in arrears with the payments on the mortgage, by mutual consent the property was deeded to the City of Kissimmee on June 7, 1940 and all rents were thereafter paid to the City. The building then became the City Hall with offices on the first floor and police court on the second floor. The third floor continued to be used by the various lodges.

One night in June 1947, a fire originating in one of the lodge property rooms on the third floor did very little structural damage but smoke and water did considerable damage to the contents owned by the various lodges using the building, so that soon thereafter some of these tenants moved out.

Orange Blossom Lodge No. 80 held their next two meetings after the fire in the Court House and then continued to use the Fraternal building for all of their meetings until 1957 when the new Masonic Temple was dedicated on April 1, 1957.

At the regular meeting of the Lodge held on November 7, 1955 a motion was made and unanimously carried that a new temple be erected on Lots 7 and 8 of Sun Shores Subdivision and Worshipful Master James A. Campbell named the following members to serve on the building committee: Worshipful R. Elmo Griffin, Kenneth C. Smith, Charles L. Koehl and Gwen W. Hilton, Chairman, with the Master of the Lodge serving as an ex officio member of the committee. The lots on which the temple was to be erected had been purchased from Past Master Lawrence Rogers and his wife, the deed being dated August 2, 1950 and was made to Kissimmee Masonic Temple Company, Inc.

Shortly after the building committee was appointed they arranged for plans and specifications for the new structure and soon thereafter a contract was entered into with C. W. Barrett for the foundation, floors, walls and roof of the new temple. As the Lodge did not have sufficient funds on hand to complete the structure, a number of the members made cash contributions to the building fund and many man-hours were also donated in helping to make the interior more attractive and usable.

This handling of course slowed the progress of construction but on January 3, 1957 the first meeting was held in the new temple and it was a very special occasion because the Most Worshipful Grand Master Charles R. Lucas with other Grand Lodge officers was present to install the duly elected officers of Orange Blossom Lodge No. 80 for the year 1957. On January 7, 1957 a special resolution of appreciation to the Grand Master was presented to the Lodge and unanimously adopted electing Most Worshipful Charles R. Lucas to Honorary Membership in our Lodge. With permission of the Grand Master the Lodge voted to borrow funds from the First National Bank to finish the building and purchase some needed furnishings. This mortgage was finally paid off in 1962 and our Masonic Temple has been free of indebtedness since that time.

In 1962 the street in front of our Temple was paved under a city paving program and we were assessed $800 as our share of this paving expense. As funds were low in our Lodge Treasury it was decided to have a steak dinner once each year to take care of this expense. The steak dinners proved very popular and are looked forward to each year.rnrnPine Castle Lodge #368 U.D. was formed and set to work in our Lodge in 1968 by D.D.G.M. Ralph T. Miller and then chartered at Grand Lodge.

Our Lodge, together with St. Cloud Lodge # 221, F. & A. M., co-sponsored Chapter #3584 of International Supreme Council of the Order of DeMolay, which was chartered on March 19, 1970. They held meetings and special functions in our temple. Several of its members are now members of Orange Blossom Lodge.

In 1984 work began on an addition which doubled the size of the dining area and added five office spaces for the Lodge.

Orange Blossom Lodge has been honored with several other Grand Lodge appointments over the years. In 1967 Worshipful Stanley W. Anthony served as Grand Sword Bearer and Worshipful John L. Summers served on the Museum and Historical Committee in 1974.

No other member of our Lodge has been recognized and honored more than Most Worshipful Ralph T. Miller and no one has put more time and effort into Masonic activities. He served as District Instructor in 1965 and 1966, in 1972 he served as Junior Grand Deacon, in 1974 he served on the Masonic Youth Activities Committee. In 1975 he vas Chairman of the Masonic Education Committee for Zone 4 and in 1976 was appointed to the Board of Trustees of the Masonic Home in St. Petersburg by Most Worshipful Richard F. Griffin, who is an honorary member of Orange Blossom Lodge. Each year our Lodge has made a liberal contribution to this home where so many of our Masonic brothers and their wives or widows, including some from our own Lodge, have lived in comfort and received the care and attention they need for the sunset years of life.

In 1983, R.W. Ralph T. Miller, P.D.D.G.M of Orange Blossom Lodge No. 80 was elected into the Progressive Grand Lodge line as Junior Grand Warden. He continued to serve through the Grand Lodge offices and was elected as Grand Master of Free & Accepted Masons of Florida in 1986. He served with great distinction and continues to serve our Fraternity and Orange Blossom Lodge in Masonic affairs.

Masonry is a worship; but one in which all civilized men can unite. It trusts in God, and hopes; it believes, like a child, and is humble. It draws no sword to compel others to adopt its belief or to be happy with its hopes. And it waits with patience to understand the mysteries of Nature and Nature’s God hereafter.